Those longing for a more straightforward style of story-telling after two initial weeks of time-twisty Moffat-y goodness were hopefully not disappointed by The Curse of the Black Spot.  There were certainly echoes of The Vampires of Venice in this watery tale in more ways than one.

Of import to us here at THT Universal, it just seemed to be pleasant, though utterly forgettable tale with a nice, perhaps unintentional callback to that old Doctor Who style stalwart, the base-under-siege story.

It was also nice to see the Doctor getting his, for lack of a better word, comeuppance, not once but three times during the episode.  The Amy arc was neatly and briefly positioned, notable that the only character in the episode with an eyepatch should be the mystery woman.  We also kept thinking of Susan Oliver from the original Jeffrey Hunter led-Star Trek pilot back in 1964 when seeing Lily Cole as the Siren/Nurse (this just means we’ve been around the block several hundred times). 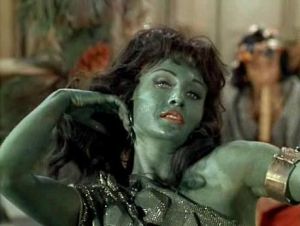 One last plea to the production staff..  Can we stop killing Rory every week (or so it seems…)?  They really drew it out this time around and it has to be said that it’s getting a bit old, unless of course there’s a larger reason at work.

Caps and images for The Curse of the Black Spot are now online.

Tags: New Who for You Tour Updates Karen Gillan Matt Smith Series 6 The Vampires of Venice The Curse of the Black Spot

On This Day in Doctor Who History